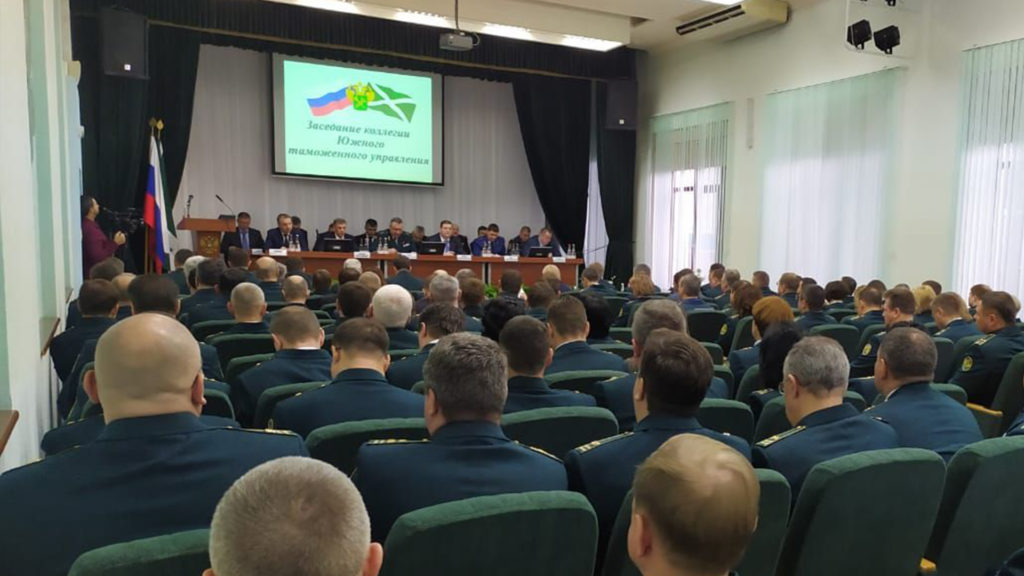 On February 6, 2020, a meeting of the Southern Customs Board was held in Rostov-on-Don, during which the results of UTU activities in 2019 were summarized and the tasks for 2020 were considered.

The event was attended by Deputy Head of the Federal Customs Service of Russia Andrei Strukov, Deputy Plenipotentiary of the President of the Russian Federation in the Southern Federal District Anton Kalinin, Deputy Governor of the Rostov Region – Head of the Office of the Government of the Rostov Region Vadim Artyomov, Southern Transport Prosecutor Gennady Kruk, Head of the Border Department of the Federal Security Service of Russia for Rostov Oblast Alexander Ektov, leadership of the territorial bodies of federal executive bodies, Southern Customs th administration and customs authorities of the region.

Opening the work of the college, the head of UTU Sergey Pashko noted that the past year was rich in events for the administration: inclusion of the Crimean and Sevastopol Customs in the administration, completion of the construction of the Regional Cynological Center of UTU in Maykop, creation of Youth Councils in the customs authorities of the region, participation in preparation and organization of events of an international and all-Russian nature, such as the Russian stage of the FIA ​​Formula 1 World Cup, the Summit and the Russia-Africa Economic Forum and several others.

According to the press service of UTU, TKS.Ru said that in 2019 the implementation of the tasks of the Comprehensive Program for the Development of the FCS of Russia until 2020 was continued, within the framework of which a series of measures were implemented for phasing in the list of actual control posts participating in the experiment on concentration of customs declaration, customs UTU bodies, the region of activity of which includes seaports. The enlargement of the Rostov Customs Post (CED) of the Rostov Customs continued. A building was purchased to host Southern Electronic Customs, which will begin to operate in full from September 15, 2020.

Sergey Pashko described the main results of the work of the customs authorities of the region in 2019. The control task for the formation of the federal budget revenue was completed by the Southern Customs Administration at 102.3%, 159.53 billion rubles were transferred to the federal budget. Export-import operations were carried out by 10 190 participants of foreign trade activities, which is 6.1% more than in 2018. Over all customs procedures, UTU customs authorities issued more than 328 thousand declarations for goods, which is 5.6% more than in 2018 g. (310.7 thousand diesel fuel). More than 62% of the region’s declaration array is registered automatically. Of the indicated volume, every third diesel fuel filed by participants of foreign economic activity of a low risk category was released automatically.

In 2019, work was continued to reduce the administrative burden on business – 5% fewer customs inspections were carried out than in 2018 (in 2019 – 230, in 2018 – 242). The effectiveness of customs inspections was 95.65% (with the control value “not less than 84%” set by the Federal Customs Service of Russia). According to the results of customs control after the release of goods, additional payments of customs duties, penalties, fines in the amount of more than 1 billion rubles, which is 20% higher than the same indicator last year.

The head of UTU also praised the results of work to control the circulation of goods in the domestic market. So, in 2019, 329 such verification activities were carried out (277 in 2018), according to the results, more than 26 tons of “sanctioned” products were identified and withdrawn from trade (exceeding the result of 2018 by more than 7 times), about 24 thousand units of counterfeit products (exceeding the result of 2018 by more than 4 times), more than 30 thousand units of tobacco products without excise stamps, 397 units of fur products sold in violation of established labeling rules, and other goods. As a result of these measures, 217 lawsuits on AP and 8 criminal cases were initiated.

Summing up the board meeting, the Deputy Head of the FCS of Russia Andrei Strukov positively assessed the activities of the Southern Customs Administration in 2019, focused on the priority nature of the work on creating the Southern Electronic Customs and ensuring its effective interaction with the actual control customs, thanked the UTU officials for the good work and expressed confidence that the South Russian customs officers will successfully cope with the tasks set for 2020.

By tradition, at the end of the event, awards were presented to officials and customs collectives who made the most significant contribution to ensuring the economic security of the country.